( Feel free to continue the story any time – or join in by making a character on the character page titled Roleplay Fanfiction Characters. Start the story from the beginning Chapter 1: The River)

(Continued from : Chapter 3: Start the Show)

This is a setup chapter.

It had been three days since the unlikely travelers embarked on their journey west. Neither companion trusted each other, resulting in very little sleep for both. Each slept face-to-face, with their weapons at the ready and one eye open. Food was prepared and eaten individually. The only responsibility they shared was starting the fire at night.

This third day marked a milestone for both of our travelers. After years of “haunting” the woods surrounding the site of her attempted murder, Denisey would finally step beyond her realm. The edge of the woods marked the boundary of which Mr. Micha had educated Lilee.

Denisey recalled from her guards that the journey to her betrothed would take 1 week. After years of obsessing over her killer, her memory was fading and couldn”t remember how many days of travel she has completed upon her death. Her best guess was that they had only left the safety of her parents and kingdom 2 or 3 days ago. She figured based on the rate of travel, due to Lilee”s size and lack of royal horses, that they would have 3 more days to reach her goal.
END_OF_DOCUMENT_TOKEN_TO_BE_REPLACED

What cooking/baking/craft lover doesn”t know about Pinterest?  There”s always neat projects on there, but of course, the first time isn”t always a charm.  They”re disasters waiting to happen… so there”s Pinstrosity!  See what happens when other people fail at Pinterest projects.  It makes me wish I took a picture of Mario the first time I tried to make him.  The clay was too warm and soft for some reason so it wasn”t keeping its shape.  Mario”s body slowly sagged.  I got so frustrated that I smashed him and threw it in the trash.  Anyway, check out Pintrosity when you”re having a bad day.  It”s nice to laugh at other people”s failures.

My Pinterest isn”t all that interesting, but here are some other things that I have made.

I’ve wanted to go to Paris for as long as I can remember, and finally being able to go was a dream come true. Now me being a super fatty, one of my main objectives was to go and visit some of the main pastry and dessert shops in the city. Recently in the States, I’ve become obsessed with making/eating/trying macarons. I think they are the worlds cutest and classiest dessert, and are a true testament to a person’s baking expertise. I even tried baking them myself, but I failed miserably. =/

Well, while I was in Paris, I was lucky enough to visit: 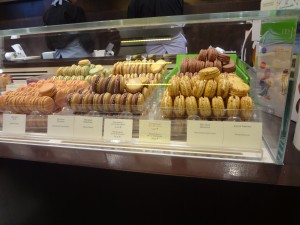 So apparently Pierre Herme is the macaron shop in Paris these days. It’s the more posh store and the most hip. Even one of Greg’s family friends, who happens to be a pastry chef, swears Herme is the God of baking. 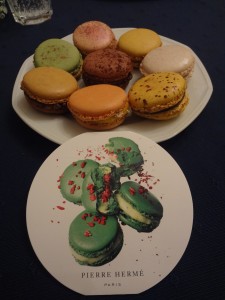 At every shop I visited, I picked out 8 macarons and had them for dessert with Greg and his Uncle and Aunt later that night. It became a fun night time ritual where Greg would cut the macaron into four equal pieces and we would all guess what flavor we were eating.

Herme’s macarons were larger than the other two shops, and had more unique flavors. Some flavors that surprised us were tangerine ginger and white jasmine tea. Sometimes the tops of the cookies themselves were decorated with unorthodox confections, such as sugar pearls, nuts, or metallic powders. What I didn’t like, however was that I felt that the cookie to filling ratio wasn’t quite right, and that they could have went a little easier on the cream.

Seriously though, it had the whole package. The stores were the most adorable, quintessential images of Paris that I have ever seen. 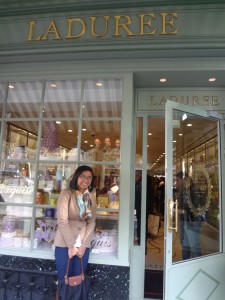 Greg’s Uncle (who knows his shit) was kind enough to take me to the original store that opened up in Paris in 1862. I was SO excited. 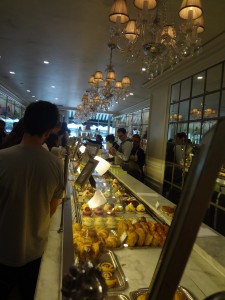 Laduree’s cookies were smaller than Herme’s, but I thought that the cookie to filling ratio was much more appropriate. The flavors were also much more pure and traditional, and they also had fruitier choices.  I also thought that they tasted much lighter and had a much more subtle flavor. 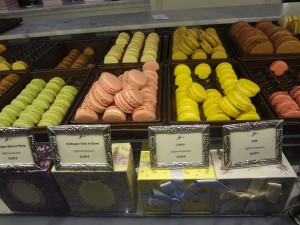 Some macarons had a marshmallow filling that I wasn’t a big fan of though.

Mulot is another renowned pastry chef in France. Sadly though, his macarons came in last place for me . 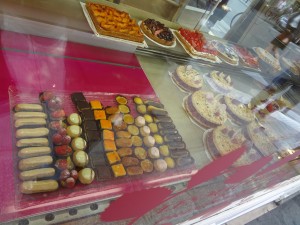 Maybe the we were served old cookies or something, but they came out pretty harder than the others. Whenever Greg would try and cut into one, they would crumble instantaneously, and it would be extremely difficult to divide them evenly. The cookies themselves seemed much smoother than the others and had a much more polished exterior. This might have contributed to their hardness. 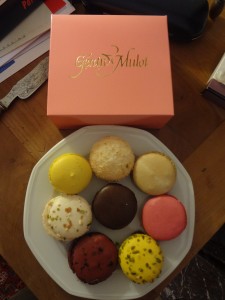 They were about the same size as the Laduree macarons, but the delicateness of the flavor was just not there. They were good cookies, but they were just not up to par with the other two greats.

Conclusion:  While Herme wins in the uniqueness and creativity categories, there is no question why Laduree remains the macaron champion of Paris. For over a hundred years this delectable dessert has and will continue to kick all other desserts in the ass. They know to keep their flavors light, pure, simple, and package it all up in the most beautiful way possible that it almost becomes something precious. I freaking love it and can’t wait to have some when I go to New York later this year.

Along with Octi, these Mario characters are some of my favorite pieces.  They’re also made from polymer clay.

I made them for Brett’s birthday and put them on his cake a few years ago.  Toad is holding Brett’s favorite lemon bundt cake, in case you’re wondering what that was.  Surprisingly, Goomba was one of the hardest to make.  Shaping his eyebrows and body was a pain.

So back in high school and college, I loved to write stories, poems and the like. I was never really good, but just loved to do it. In high school a friend and I had an idea to write a novel. We got about 5 chapters in, when we had other priorities. My sophomore year of college, I decided to resurrect this idea. I had modified some of the early chapters, removing some of them or moving the ideas into other chapters. In the end I added about 10 new chapters, with my friend contributing a couple more. The only one to see any of this work has been Greg, so I wanted to share 2 chapters so that others could see what I had done.

The moon illuminated the burgundy V16 as it raced north. After thirty miles the car pulled to the curb in a small town near the course. The town was only one square mile in area, with no traffic lights. There existed two stops signs at its major cross street. The most traffic this place got was when the interstate was having work done on it and this became the detour. Two lonely light posts lit the sidewalk.

With shades in tow he changed from his gray slacks and blue shirt to more themed attire. A pinstripe suit and pink shirt inlaid with a Celtic pattern around the collar. A white tie added much needed contrast, but the defining pieces were the golden cufflinks, hand crafted in the nineteenth century by his ancestors. To top off the ensemble he ventured to his trunk.

The compartment revealed forty plus designer newsboy hats. Carefully perusing his vast collection, he finally selected his best hat. A white trimmed black hat with two pink stripes to match his shirt. He wasn’t ready but he did look good.
END_OF_DOCUMENT_TOKEN_TO_BE_REPLACED