Ahoy! This is the first of what I hope to be a series of small glimpses into the careers of the video game music (VGM) composers I find interesting or cool or whatever! Basically, I”m not going to do exhaustive research about their entire career and report on it because that”s boring and lame, I”m just gonna talk about the stuff with which I am already familiar (and maybe do a little research to make sure I”m not full of shit on some of the details) and of course select a few tracks for your listening pleasure. Hopefully somehow I can communicate the important contributions VGM has made to popular culture and to my music tastes and highfalutin” stuff like that, but if not, whatever! I just want to write about VGM because I like it.

This time I decided to start with a relatively short and accessible one to ease myself and everyone else in the topic. Let”s get into it!

Yōko Kanno (菅野 よう子) is super famous (maybe?) as far as composers go as she composed most of the music to mega-popular, top-notch anime Cowboy Bebop. But, did you know that she got her career started as a VGM composer?  Well, you probably guessed it because she”s the focus of my VGM composer spotlight, but please pretend I just blew your mind anyway!

Yōko is incredibly prolific, having composed and still composing for TV, movies, commercials, albums for her own band, solo albums, J-pop artists, and of course anime and video games, starting in 1985. It seems to me a big reason she is able to keep churning out music at an incredible rate is her ability to excel in numerous genres (jazz, classical, blues, pop, techno, etc.). In addition to this, she also has the ability to look cute while wearing a hat: 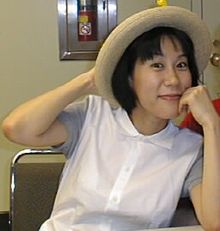 So yeah, what the hell can”t she do well? Probably nothing (seriously, just look at her discography on Wikipedia, it”s ridiculous). Jeez, Yōko, save some talent for the rest of us. Alright, enough with the summary of her skills and accomplishments, let”s get into the meat of this thing.

The only Yōko-composed game series that is familiar to me is the Uncharted Waters series. Basically, these games are RPG simulations that feature all kinds of maritime adventures, from exploration to pirating to regaining your family”s honor by expanding the influence of your home country to that of a vast empire. All the tracks I feature will be from this game series.

To get you guys into the music a little more, I”ve tried my best to contextualize each track by including a little scenario with each one. Without further ado, here are some cool tracks from the series!

At last the time has come. Your stupid dad finally got himself killed by some pirate or something, and now it”s up to you to regain the glory of your once-noble family name. With the one good thing your father left behind, the mighty ship Balthromir, it might just be possible. Ahoy mateys, for there be Wind Ahead!

There you are, sailing towards the Mediterranean after returning from an ill-conceived expedition across the Atlantic. The sun is finally starting to peek through the clouds and you”ve just seen your first seagull in months. Dreary, overcast days are gone, for you are Aboard in the Temperate Area. It”s ok to be hopeful, even cheerful again. It”s probably time to retire from sailing and just settle down with that one hot barmaid, after all. Happier times are surely ahead.

After enduring a lifetime”s worth of trouble at the hands of pirates and salt pork, your considerable experience and lady luck has led you to the “virgin” shores of a realm filled with enough spices to properly usher in the age of globalization. At second glance, it seems there are some heathen natives with spears eagerly awaiting your arrival. Ah well, they probably will just let you take all their stuff as long as you don”t look at them funny. Next stop, the Land of Luxury!

Guess what, now you”re a cool Italian guy named Pietro. You”ve inherited your father”s massive debt, but that doesn”t stop you from retaining a full-time band to play your favorite jam, the Theme of Pietro, whenever you feel like it. You”re confident that you”ll find the world”s greatest treasure, so why not let everyone know that the great Pietro Conti has arrived everywhere you go?

Yeah, if you couldn”t tell I basically just made all those scenarios up (with the help the actual track names and vague Wikipedia descriptions of the game) because I really don”t know anything about these games. I just like the music from them. But I bet you that”s all exactly what”s happening in the gameplay when all these tracks play.

I guess that about wraps up the start to my journey into the uncharted waters that is writing about my passion, video game music. Yōko Kanno is cool, and so is VGM, and hopefully now you like both of them, and hopefully I can keep this up because it was a ton of fun.

P.S. What”s up with the people spell Japanese? Her name is most often spelled Yoko when clearly the first syllable is elongated. Shit like that just contributes to ignorance and the general American population being woefully unable to come anywhere close to a correct pronunciation of any word that doesn”t begin with “Burger” or end with “King.” Alright, so maybe that joke doesn”t work, but I”m hungry and a double cheeseburger does sound pretty good right about now…

Special bonus fun time! Uncharted Waters actually came out first for the NES, and the music was later adapted for the SNES version. Some of the music sounds significantly different between the versions and in some cases it”s hard for me to choose which version sounds better. So, for your comparative pleasure, here is the NES version of the awesome track “Aboard in the Temperate Area” (I featured the SNES track above) in all its 8-bit glory:

Aboard in the Temperate Area (NES version)