The adventures of a man with his hats

I guess I need to start writing something. I have been trying to avoid this assignment for as long as possible, but I think it is time that I “explore” my thoughts.

Thing have been going well. I have been kicking it with Darrel and watching some good sci-fi movies. I checked out my command post and am pleased with it. I haven’t really decorated or anything and don’t think I will. To me it is just an office and one that I just want to concentrate in.

I think that Darrel has a huge crush on Eveyln and is trying way too hard. He has to just back down a little otherwise she is never going online casino to talk to him. Jill is cool, but haven’t really hung out with her without Darrel. I might try to invite her to do something, which will also give me some time away from Darrel. I don’t want to be attached at the hip with the guy, otherwise making tough decisions in the cockpit will be that much harder.

Chrisitina and Eveyln have heard some noises coming from the garbage shoot and am curious as to what their plan is. I suspect it is a test of our concentration, but who can tell. I just hope they don’t blow a hole in the side of the ship. I really do want to get to Mars.

I think that is all I have to say. We have set our course and should be in the cabin every morning for corrections and such. But will have some free time for a little while. The hard part will come when we are closer to Mars.

The other day we were doing a mic test and I suggested we do Abbot and Costello’s classic Skit “Who’s on First”.

We did this in 1 take sight reading the script. Might be the comings of the next great comedy duo.

END_OF_DOCUMENT_TOKEN_TO_BE_REPLACED

I have been avoiding writing anything for 10 days. However, I just got reprimanded so I guess its time to write, stupid contract.

So since the mission started about a week ago, everything has been smooth sailing. Evelyn’s initial trap yielded no results and our investigation continues. During the day I have been walled up in the greenhouse getting all the experiments set up and I am spending most of my nights in rec room monitoring the ship with Eveyln and Jill. We have not learned much, but it is fun to watch and make notes for our drinking game. Once I have the rules set, I will write about them. I think the rules will be constantly evolving, but that will be part of the fun. I might add the noise as a rule worth an a couple of drinks, since that does pop up every few days.

Darrel and Ryan keep asking us to watch some movies. I think Jill has caved a few times, but I have been able avoid them by being in lab or having Evelyn act as my body guard. I do not know what I would do without her.

I keep checking the cider, making sure its on track. It should only be another 10 days, then I can start drinking. Days will get so much easier. Maybe with a few drinks in me I will cave and watch one of these movies.

Well, I think that is enough writing. I have some surveillance to do. Eveyln has cobbled together some robot device to go through the trash shoot and ducts. Maybe the mystery equipment will turn up. I have been betting that it is some kid of animal, as I have noticed some small nibbles in a few plants. But maybe I am just going a little crazy without some alcohol.

It was the end of January, when four brave men embarked on an epic gaming adventure. We eased into the day with a couple of hour long games. Before we settled into our main event we indulged in in delicious falafels and banana shakes. To suppress our hunger pangs while playing we descended upon a local market to gather sweet and savory treats. We returned to begin the eveloutionary/adaptation game of Dominant Species. 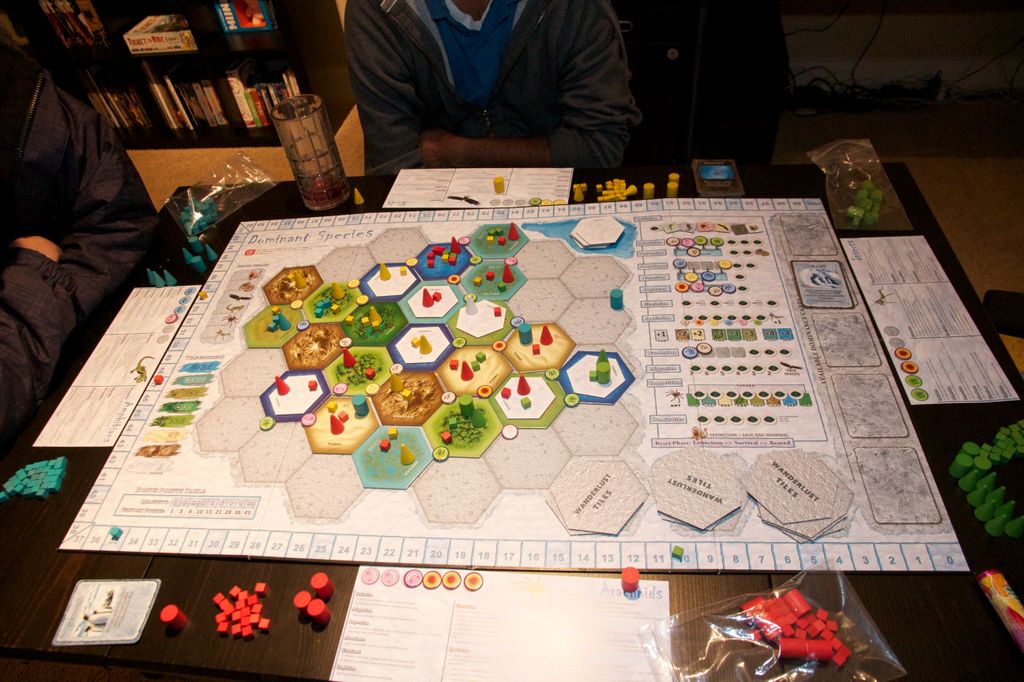