So I decided to post this here, just to show that I still use the website, and still sift through our old random posts from time to time.

So one thing you may not know about me is that I love the Ghibli aesthetic. I love Japanese forests and the countryside and the atmosphere that it creates. I love the innocence and simplicity that they represent and the absolute gorgeousness of nature. I really like the idea that, like most things in Japanese culture, the beauty in a object comes in its own simplicity. I think となりのトトロ (My Neighbor Totoro) is the quintessential visual representation of this aesthetic.

So like most ideas, this shit came to me from thin air. As I was looking at my “Totoro Station” on my bookshelf, I thought that I needed to level up. I wanted more. Right then and there I said to myself. “I’m going to make myself a mini forest”.

So I bought each of the things on different days from different places and just waited until I had everything to assemble it.

I had the styrofoam,Totoro figure, mini flowers, mini bottles,and glue gun already at home. I glued layers of different sizes of styrofoam together to create a multilevel-ed landscape. Then I carved it to fit inside my glass cloche and started to glue the moss and other parts to it. It probably took around 2ish hours to make. Greg also said he bought me some miniature mushrooms to add to it, so it’s like 99% done.

Here is the final product. I’m pretty happy with it.

I guess I need to start writing something. I have been trying to avoid this assignment for as long as possible, but I think it is time that I “explore” my thoughts.

Thing have been going well. I have been kicking it with Darrel and watching some good sci-fi movies. I checked out my command post and am pleased with it. I haven’t really decorated or anything and don’t think I will. To me it is just an office and one that I just want to concentrate in.

I think that Darrel has a huge crush on Eveyln and is trying way too hard. He has to just back down a little otherwise she is never going online casino to talk to him. Jill is cool, but haven’t really hung out with her without Darrel. I might try to invite her to do something, which will also give me some time away from Darrel. I don’t want to be attached at the hip with the guy, otherwise making tough decisions in the cockpit will be that much harder.

Chrisitina and Eveyln have heard some noises coming from the garbage shoot and am curious as to what their plan is. I suspect it is a test of our concentration, but who can tell. I just hope they don’t blow a hole in the side of the ship. I really do want to get to Mars.

I think that is all I have to say. We have set our course and should be in the cabin every morning for corrections and such. But will have some free time for a little while. The hard part will come when we are closer to Mars.

I FINALLY POSTED. This chapter has two perspectives. It starts of with Lander May then switches to Rita Lauren.

Chapter Eight: How to Play a Fool

I am surprised to hear Lauren sing up on that stage. It is refreshing to know there is a side of her that is not all down-to-business cop. She has always had a pleasant, fair speaking voice, but when she sang…wow. Let’s just say I’m impressed.

Impressed by only her singing, mind you. While I have been off playing detective, what has she been up to besides showing off her vocal cords (and no doubt, the extravagant dress and jewelry she is wearing during the performance). I am curious as to what information she pulled out of Guy Jones. There must be some reason she is working here right now. I will not give away her cover though. The hidden glares she sends my way (which I can sense, without needing to see them) have assured me of keeping my mouth tightly shut.

I motion to Jeff and we both make our way out of the club. The night air is brisk but not chilly, perfect for a stroll on this summer night. But where shall I take a stroll to?

Well, in this part of town, all the young and restless with too much money in their hands are probably out-and-about this weekend. And I have no plans to contact Lauren until tomorrow. What’s a blind man to do but to casually listen in on some gossip? END_OF_DOCUMENT_TOKEN_TO_BE_REPLACED

I”ve lived in California for 7 years now.  Even though it has become a good second home to me (despite allergies), I miss Hawaii sometimes.  I miss my three F”s: family, friends, and FOOD!!  I”ve been trying to cook like my mom, but it rarely turns out the same.  I”ve also been trying to cook and bake other things that brings back wonderful memories for me.

Chi chi dango is a popular treat in Hawaii.  It”s like mochi, but there”s no filling.  It”s just plain, soft, chewy, sweetness!  I remember the first time I had it.  I was in kindergarten and my teacher made it to celebrate Girl”s Day (Hinamatsuri in Japanese).  It was pink and white.  I always looked forward to Girl”s Day when I was little because either my teacher or one of my classmates parents would bring in chi chi dango to share.  Even my parents (Mr. and Mrs. Chinese-food-only) learned how to make it!

I decided to make it for the first time this New Year”s and brought it over to the Watanabe New Year Celebration-Eat-All-Day-Fest.  I had no idea that it was pretty easy to make.  When Halley started to make plans for this birthday party, I told him I wanted to make his cake.  He didn”t want cake, but one of the things he requested was chi chi dango. 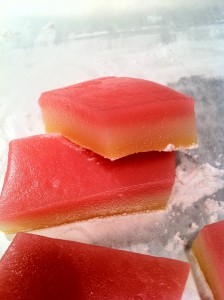 Chi chi dango is usually cut into rectangles.  This is a 3 layer one I made for New Years. END_OF_DOCUMENT_TOKEN_TO_BE_REPLACED